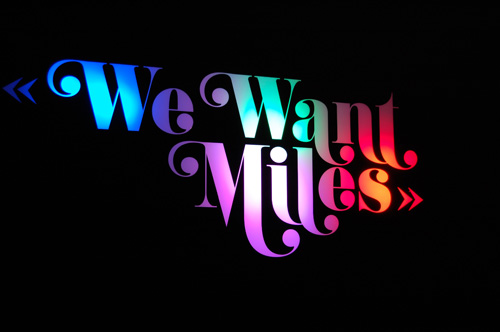 Opening last night in Montreal, this heady, Miles Davis adulating exhibition, “We Want Miles” is stuffed with everything from music scores, album covers and publicity photos to paintings by Basquiat and Miles Davis, along with a monumental sculpture of Miles by Niki de Saint Phalle. The excess of information, however, is offset by the fact that the [initial I thought it was free like the previous Yoko Ono – Lennon “Imagine” exhibit at MBAM] and makes for easy repeat visits. Those who want to read each blurb detailing the progression of Miles Davis’s life and career as a musician will have a chance. The house was packed with more Montreal and international musicians than I have ever seen at the Montreal Museum of Fine Art. Spirits were high, a live trumpeter played and drinks and music were flowing.

While I snapped a few photos as posted below, I thought about how the curator might manage to tie in Miles’ career as a visual artist with his music.

Let me first highlight the display on a large viewing screen of what I think is the single most beautiful sequence shown at the exhibition, where music meets visual art, ie cinema. Miles Davis plays the sound track in this clip in what some have called the “loneliest trumpet solo ever played” … or at least the loneliest in cinema. 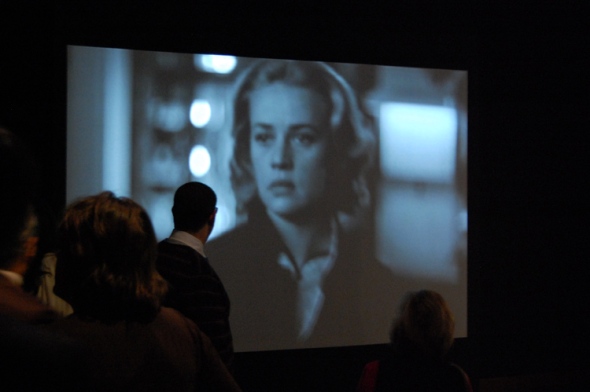 Jeanne Morreau on large screen in *We Want Miles* exhibition

Its a sequence in which a character played by Jeanne Moreau looks for her lover in the streets of Paris. It is shown on a large screen along the wall of the exhibit as in the photo above. Below you can see the most of the clip shown in the exhibit and hear Miles’ haunting trumpet solo as part of the film score.

And the album cover for the Miles Davis soundtrack to the film, translated: “Elevator to the Gallows”

Album cover for the Miles Davis soundtrack to the film, translated: *Elevator to the Gallows*

Cinema soundtracks aside, the work of visual artists comes up to highlight its relationship to Miles process from musical to paint. Much was made in the press releases about the Basquiat pictures which were inspired by the jazz greats and in turn inspired Miles to paint or draw nearly everyday during a particular period of later in Miles’ life; making time to do so even while on tour.

Below are the Basquiat pictures that refer to Jazz: 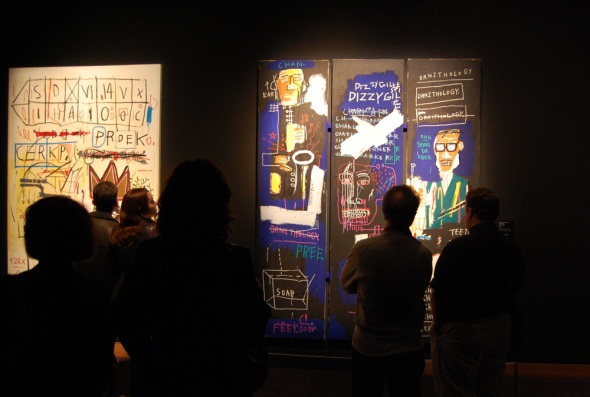 You can read the text references to Dizzy Gilespie and Charlie Parker in the official images of the Basquiat paintings below: 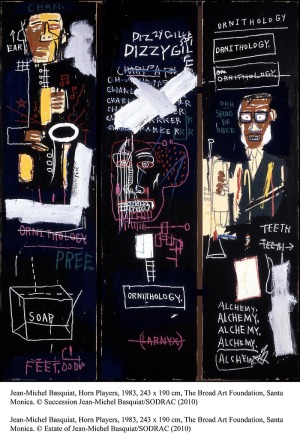 Official image of the *Horn Players* from the museum website

Official image of *Bird of Paradise* from the museum website.

The record on display as reference to the above painting.

The following are paintings by Miles Davis on display: 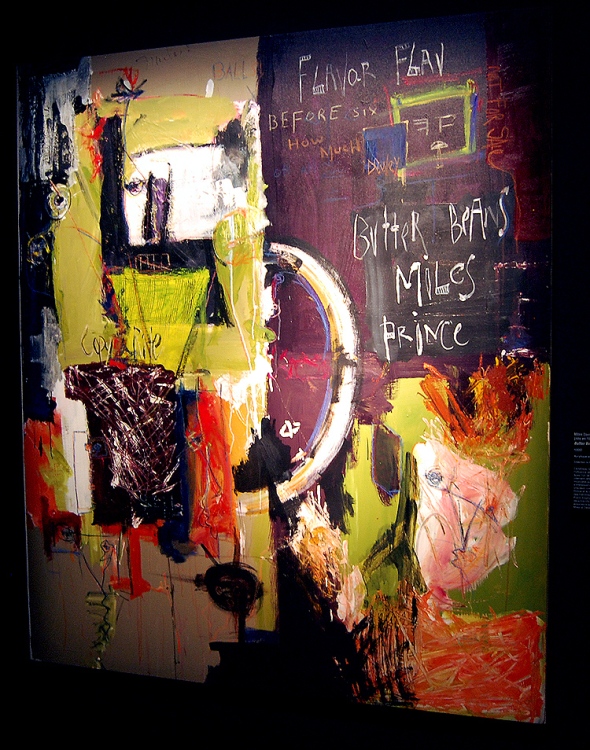 While I appreciate Miles working through his creative process, his painting is largely derivative and not as compelling as the drama of his life itself, particularly his struggles with music production, drug addiction and difficult and at times abusive relationships. His struggles with heroin simply highlighted those tragedies.

Miles a few hours before a drug arrest.

Rita was touched by this photo and the look on Miles face. The tragedy of a generation of musicians [Charlie Parker was also addicted to heroin] whose lives where devastated by heroin and other drug use. The next photo shows Miles locking himself in at his parents place and going “cold turkey” to shake the biological addiction to the drugs.

Miles goes cold turkey and comes out clean for some years.

A number of instruments on display were curious items; relics of the artist:

A flugelhorn played by Miles

A trumpet in blue

Miles Davis's son Erin Davis points at a trumpet played by his father.

I asked Erin Davis why there was not more visual artwork by Miles on display. He said much of it was sold and is now in private collections. Much that was on display was part of the Davis estate. He did say there are lithographs held by “Bag One Arts” which is the same business that represents Yoko One and John Lennon’s work. I couldn’t find any actual images of prints online. Erin did visit the exhibition when it was in Paris. He is presently writing music for a film score and appeared to be good spirits and content with the show at the Montreal Museum of Fine Art.

While I was excited about the music, photos, video interviews and objects, I did feel that the whole relationship between the actual painting and drawing and what it meant to Miles in terms of his music, and that in terms of any relationship he had with Basquiat was poorly explored. Similar links could have made with his fashion and clothing. This may have been in part a question of availability of the artwork, but it did leave me feeling that the grasp Miles had on visual art was superficial at best, though I may be wrong. In part the sheer weight of his musical genius is so difficult to counterbalance with art from other disciplines. Miles would have needed create work in the visual arts that was downright stunning not to be eclipsed by the monumental achievement of his music. In which case, perhaps writing film scores by improvisation, watching as the film passes by [somewhat in the tradition of the pianists who improvised at silent movies] is the most intimate link Miles successfully formed between visual art and music.

Please leave comments below if you have anything you have to help me understand more about Miles or other musicians who work in the visual arts, particularly in terms of a strong relationship between the two in their creative process.
_________________________
Story based on interview with Erin Davis in the Winnipeg Free Press – Birth of the cool: Miles Davis feted at Montreal Museum of Fine Arts
_________________________

Rita checking out a tenor saxophone used by John Coltrane alongside of trumpet used by Miles Davis. 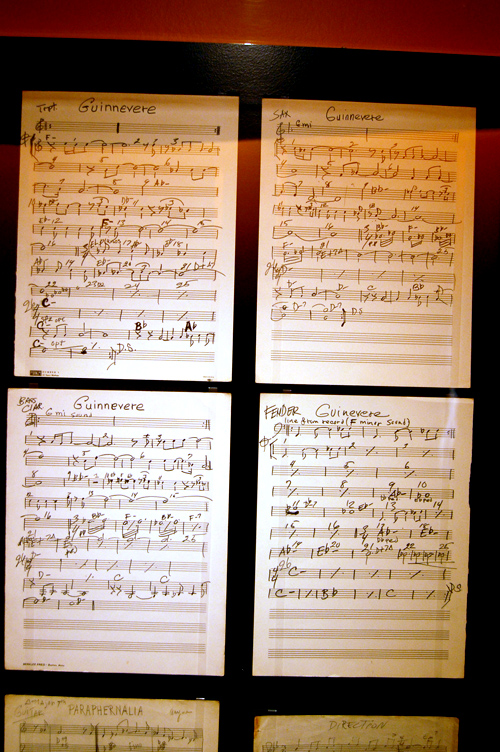 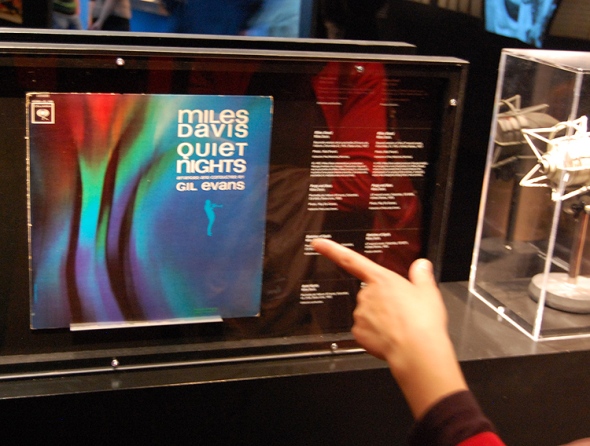 Rita points at one of my favorites *Quiet Nights* ... its true genius 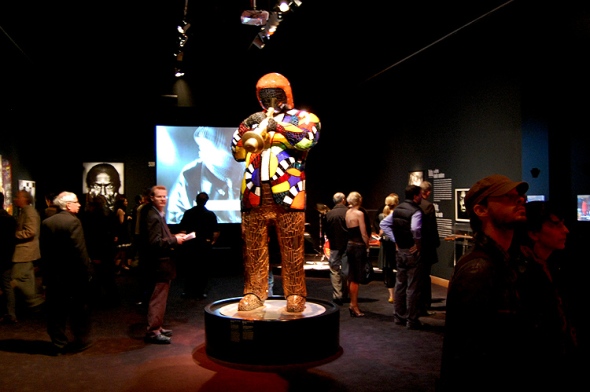 Installation view: Room with jackets, photos by Irving Penn and Annie Liebowitz, and other memorabilia

Poster for Montreal International Jazz Festival with drawing by Miles 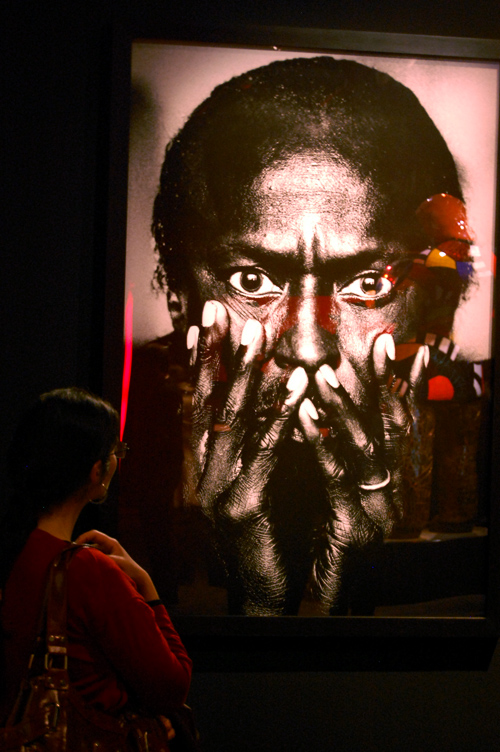 Huge image of Miles at the exit before passing through a gift shop.

Packed house with music and drinks.

Representatives of the Miles Davis estate and their tax attorney form part of the megashow entourage. 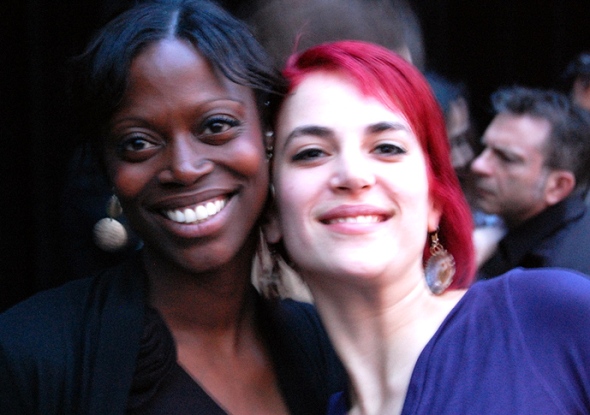 Beautiful women working with the DJ.

The crowd begins to dwindle 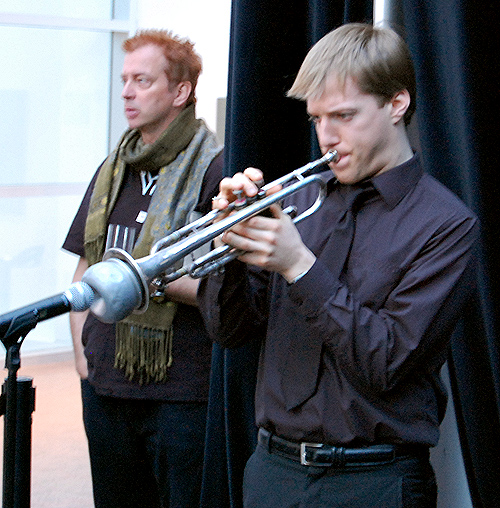 The next generation keeps on playing.

A young couple enjoys the opening with a glass. Guess who?

Miles on the cover of the newsprint Rolling Stone... while...

...while other press goes out on the Miles show in Montreal.